“When I heard The Pixies for the first time, I connected with that band so heavily I should have been in that band – or at least in a Pixies cover band.” – Kurt Cobain

“I never could get over the fact that The Pixies formed, worked, and separated without America taking them to its heart or even recognizing their existence for the most part.” – David Bowie

Most of the time the bands and artists who influenced future acts are quite obvious. Think how many times you’ve heard some rock star say they chose to pursue a life in music because they saw or heard Elvis Presley or The Beatles. Think how many hard rock bands over the years noted Led Zeppelin, Black Sabbath, or Aerosmith as influencers. Many a singer-songwriter has praised Bob Dylan for serving as their influential musical muse as well.

Yet how many times do you hear contemporary bands  credit a band you’ve only vaguely heard of, or never heard of at all as one of their primary sources of inspiration/influence? Well I know of one of those bands, and they call themselves the Pixies. 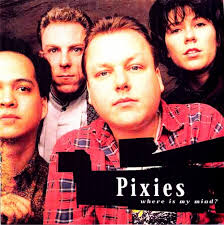 Formed in 1986 in Boston, they released their debut studio album, Surfer Rosa, in 1988. I didn’t actually hear about this band until I was in college a good five years after that. By this time, I was more familiar with their now-former bassist, Kim Deal, who’d gone on to form a band called The Breeders. 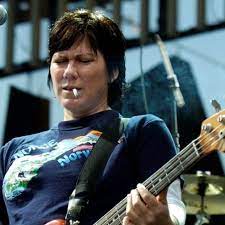 The Pixies’ debut album featured some solid tracks, including Bone Machine, Gigantic, and one of their more recognizable songs, Where is My Mind?

Their 1989 follow-up, Doolittle, was their best album in my opinion. Standout tracks included: Debaser, Wave of Mutilation, Monkey Gone to Heaven, Hey, Gouge Away, and probably their “poppiest” song, Here Comes Your Man.

So just who were/are the Pixies? Why did they matter to future bands? Why didn’t they take off and fly among the skies of commercial success themselves?

The mastermind behind it all is this man: 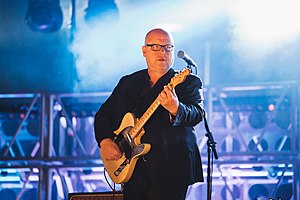 Charles Thompson IV…aka, “Frank Black,” aka, “Black Francis.” That’s a lot of names for just one cat. When I was first turned on to the band, he went by Frank Black, so I still go with that. Frank is the founder, songwriter, lead singer, and rhythm guitarist of the Pixies. He’s a talented guy. Probably really smart. Likely a little strange too. Perhaps we’ll just say “different.” This leads to my theory as to why the band never really took off commercially.

Just three years earlier however, the music world looked quite different. Pop bands had to look and sound a certain way. Rock bands had to look and sound a certain way. In 1988, the Pixies were a classic example of trying to fit a square plug in round hole. It just didn’t fit. To this day I suspect it’s the same reason one of my favorite bands of that period, King’s X, was also unsuccessful commercially. In the case of the Pixies, perhaps they were simply too bat-shit weird for most people period. I’ll be the first to admit most of the time I have zero clue what the hell Frank Black or Kim Deal are talking about in their songs. Thing is, it really doesn’t matter. I dug their sound. I dug their vibe. A creative, original, and talented band. The music industry has always been plagued by imitators, emulators, and fakes. The Pixies were the real thing. That’s something I really respect in Rock. The strangest thing about this band is that they’re hardly any older than the artists they influenced the most. Kurt Cobain was the most vocal Pixies fan during his time, and yet Nirvana’s debut album came out only one year after the Pixies’ debut. Pearl Jam’s Eddie Vedder, Radiohead’s Thom Yorke, and Weezer’s Rivers Cuomo have all commented over the years how much they looked up to and admired this band’s work, and yet their respective bands all broke through only a few years after the Pixies started. Based on the timeframe of things, you’d think the Pixies would be regarded as contemporaries of the all those successful ’90’s bands. Yet they’re not; they’re viewed as pioneers of the sound that helped define those acts. Pioneers who trail blazed the path just a hot minute before those whom followed crossed. As I said, quite strange.