Earlier today I was checking the Facebook and saw that an old college friend posted a clip from the 1993 classic, Tombstone. If you know the film, you’ll remember the scene: While in Wyatt Earp’s saloon/casino, Cowboy Johnny Ringo meets the legendary Doc Holliday for the first time. They exchange unpleasantries back and forth in Latin. The tension rises when Ringo draws his pistol on Holliday and proceeds to perform a gun spinning/twirling show for the on looking audience. Holliday then brilliantly defuses the situation by replicating Ringo’s act by spinning and twirling his handled shot glass.

This of course sidetracked me into spending the next half hour scouring youtube for various other great clips from the film.

Now if you’re younger than me you’re probably wondering how I can call something from 1993 a “modern” anything. Well, by “Western” standards, it is. Growing up as a kid, Westerns were always on t.v. Gunsmoke, Bonanza, The Big Valley, The Rifleman, etc. One thing I found they all had in common was they were really old! 1950s, 1960s, what have you. John Wayne movies, same thing. Even Clint Eastwood’s classic “Spaghetti Westerns” were from the 1960s. Though I found some of this stuff mildly entertaining, (my brothers loved Big Valley, and I also liked Bonanza), most of it seemed so out of touch to me.

This started to change when some of the 1980’s “Brat Pack” boys got together and made the Young Guns films.

These were great! The films still had the classic Western motifs, but the roles were played by actors I knew from The Breakfast Club, The Lost Boys, LaBamba, etc. Much like the old Westerns, there were gunfights, drinking, machismo, horses, robberies, and brothels, but the gunslingers were guys I knew.

Tombstone, however, was the film that brought it all home for me. The story was classic Western material: Wyatt Earp, Doc Holliday, the Curly Bill Cowboy gang, and the “Gunfight at the OK Corral.” The cast was fantastic.

Kurt Russell as Wyatt Earp. Russell’s work in the 80’s with director John Carpenter pretty much made me a Russell fan for life. The Thing, Escape From New York, and Big Trouble in Little China. Russell was once again at the top of his game here. 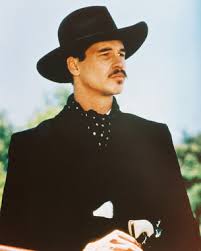 Val Kilmer as Doc Holliday. Hands down, best performance of his otherwise underwhelming acting career. Sure, we all loved to hate him as Iceman in Top Gun, and I suppose he pulled off a good Jim Morrison in Oliver Stone’s The Doors, but by and large I’ve never been as impressed with Kilmer as Val Kilmer is impressed with Kilmer. Always found him to be one of those actors who took himself too seriously. I’m good with Daniel Day-Lewis being that way. Not so much with Val. That said, I found his performance in this film to be Oscar-worthy. The man literally transformed into Doc Holliday and quite possibly stole the film.

Sam Elliott and Bill Paxton as Virgil and Morgan Earp. Two guys you could always count on to enhance an ensemble cast. For my money, Sam’s best supporting role was playing Dalton’s sidekick, Wade Garrett, in the Patrick Swayze 1989 masterpiece, Road House. There I said it….Road House….masterpiece. Yes. I’ll take those words to the grave with me! haha. Bill Paxton, who sadly passed away last year, was his usual self in Tombstone. It’s funny, perhaps it had something to do with his delivery, or the sound of his voice, expression on his face, or something I could never put my finger on, but in some ways Paxton kind of came across in films like a bad actor, yet I always ended up liking his performances. Makes no sense I know.

Michael Biehn and Powers Boothe as Johnny Ringo and Curly Bill Brocius. My favorite kind of “bad guys” are the ones who I sort of like just a little bit. It makes things more interesting. Think Hans Gruber from Die Hard. Think J.R. Ewing from Dallas. Hell, think Darth Vader. You know they’re bad dudes, but they’re charismatic, perhaps a bit stylish, and most certainly cool! In that sense, these two classic supporting actors pulled it off to a “T.” Powers Boothe, who just passed away last month, was a very talented actor. Check out his work sometime.

There were many other actors who filled out this cast and helped make the film what it was: Dana Delaney (China Beach), Jason Priestley (90210), Billy Zane (Titanic), Thomas Haden Church (Wings), Michael Rooker (Days of Thunder). There were even brief appearances from Billy Bob Thornton and Frank Stallone. Yes, Frank Stallone! Try and tell me you’re not interested now!!!

The acting. The story. The pacing. The action. It was all good. I even loved the fake mustaches! Don’t hate. Not everyone on the set was blessed with Sam Elliott’s natural gift of facial hair growth!

Looking for a half-hour break from productivity? Check out the making of Tombstone. It’s an entertaining view. Then follow it up sometime soon one night with a viewing of the film itself. Get your popcorn ready! Enjoy.