Rock N’ Roll. It means different things to different people. We all have the bands and artists we love. Certain genres. Particular eras and generations. Some pretty much have universal acceptance for being loved or liked. In my life, (pun intended) I’ve met very few people who don’t like The Beatles on some level. How many Rock fans have ever told you The Rolling Stones suck? I mean seriously, that’s someone who truly can’t get no satisfaction. Ok, I promise I’m done with the puns.

Granted, there will always be bands/artists who are polarizing. Bands loved and worshipped by some, and despised or considered irrelevant by others. Rush is one that certainly comes to mind. They’re a band I’ve come to respect  and even enjoy some of their catalog, but I remember many years where I simply couldn’t understand why people loved them so much. I didn’t see the appeal at all.

This got me thinking about other bands and artists that may be polarizing to music fans. Let’s take a look at a few…..

U2. I’ve basically known this band my whole life. It’s a misconception they broke on to the scene with the album, The Joshua Tree. There’s no doubt that album made them superstars and one of the biggest Rock bands in the world for  the next two decades. But U2 was already a known entity prior to 1987. They were in regular rotation on MTV as early as 1983 with their album, War. They played “LIve Aid” in 1985. They already had songs such as Pride, New Year’s Day, and Sunday Bloody Sunday in their arsenal before the first track of The Joshua Tree was ever recorded. I come from an era when albums had sides. Whether you first heard it on LP or cassette, I’ll still put  Side 1 of The Joshua Tree up against just about anything.

They’d go on to record many more albums, enjoying huge commercial and critical success with some (Achtung Baby, All that You Can’t Leave Behind). Others that weren’t quite as well received but were strong albums in my opinion (Pop, How to Dismantle An Atomic Bomb). Some that missed their mark (Rattle & Hum, No Line on the Horizon). Then a couple that no one’s listened to or possibly even know about, but I think were actually pretty good. Specifically, their two most recent efforts (Songs of Innocence, Songs of Experience).

As you can tell, I’m a fan. Album and ticket sales over the years would indicate I’m certainly not the only one. Yet I must say, it surprises me over the years how many people I know who hate this band. In some cases, even people who’s music opinions I really respect are part of the anti-U2 crowd. I’ve often wondered why. It can’t be for lack of originality. U2 has reinvented themselves over the past 40 years more than just about any mainstream band I’ve ever known. Bad singer? Hell, the lead singer’s nickname is short for the Latin phrase bonavox, which translates to “beautiful voice.” Bad musicians? Dave Evans, aka, “The Edge,” has one of the more distinctive sounds of any guitarist out there. So what is it?

I think maybe it’s this guy. Paul Hewson. You know him as “Bono, the World’s President.” Listen, I think the world could do a lot worse than a guy who’s tried to help eradicate diseases, improve the global environment, and preach world peace.  There’s no question he’s used his platform to it’s fullest extent and reach. That said, I think some people look at Bono and think, “Dude. You’re a singer in a rock n’ roll band. Just go sing a freakin’ song and chill out.” I sort of get it. I certainly don’t begrudge him for tackling the causes he has, but I can see how he wears on people a bit. It could also be his perceived arrogance. I imagine a lot of folks probably think the reason Bono does half the things he does is because he loves the attention it brings him. 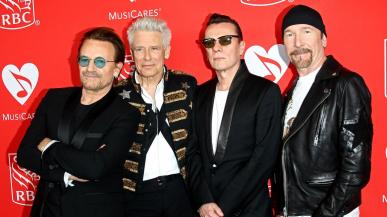 Another possible reason for the dislike is U2 has simply tried to hang on to the mainstream spotlight or stay within the limelight for far too long. As much as I like them, there’s no question they’ve looked like a fish out of water among all these younger acts at the grammy awards and others such shows in recent years. There usually comes a point where a band or artist realizes they’ll always have their core audience, but their days of being mainstream are long gone. (Somebody needs to let Sting know this too) I think U2 might realize it now, but I can’t say I’m sure of that. Perhaps this goes back to the whole arrogance part.

Whatever the reason…..politics, arrogance, bad nicknames, a distaste for knit hats and blue tinted sunglasses…..I think it’s a shame if any external factors prohibit one from enjoying so much of the music this band has produced for the better part of the past four decades. They are definitely one of the polarizing bands out there, but they’re not the only one.

Thanks for reading part one. More to come.