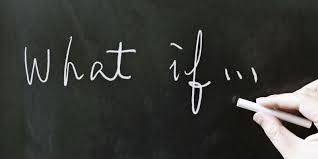 Life is full of “What if’s.” Sometimes they make us curious. Sometimes we’re relieved the “what if” didn’t happen. Sometimes we just don’t dwell on it at all. The Rock world is no different. I’m sure many-a-conversation has lasted right up to closing time at the neighborhood watering hole discussing the “what if’s” of this band or that artist. That’s what makes it interesting. We can make educated guesses based on what we know of a band, but the truth is we really can’t know for sure.

With that in mind, the “What if” series is my attempt to analyze a few of these scenarios and offer some thoughts. Keep in mind, these are simply my educated guesses based on things I’ve read, heard, and interpreted. For the sake of making a somewhat convincing argument, I’ll narrow my focus to bands and artists I have a pretty good historical knowledge of. So let’s start with my all-time favorite band.

For starters, they wouldn’t have disbanded. Bonham died just three weeks prior to a planned Zeppelin tour in North America. The prevailing thought at the time was the band would start working on and recording their next studio album following the tour.

The question is, what would that tour have looked and sounded like? What would that next album have been? Look, their 1979 album, In Through The Out Door, was not a good album by Zeppelin standards. If I’m being honest I don’t think it was a good album by any band’s standards. I often refer to it as the John Paul Jones solo album due to the larger than normal contribution of Jones songs on it. This was likely because Jones was the only one in a position to contribute much at the time. Page’s heroin addiction and Bonham’s alcoholism were fully out of control, and Plant was still reeling from personal tragedy in his life. Flipping the calendar from ’79 to ’80 wasn’t exactly going to make all that change.

Secondly, as I mentioned in a previous post, the 1980’s were not a kind decade to late ’60’s and ’70’s bands. Think the Allman Brothers, Eric Clapton, The Who, and The Rolling Stones. I don’t think the decade would have played out any better for Zeppelin. Their disastrous reunion performance (sans Bonham of course) at 1985’s Live Aid concert was proof they were still not in a good place collectively.

In my mind, Robert Plant’s 1988 solo album, Now and Zen, was the first sign of quality work post-Zeppelin. Plant made several prior solo albums throughout the ’80’s, but this one seemed to signal he was back.

The album was not well-received by critics, but it did chart (#26) on the Billboard Top 200 in America. I’m not familiar with it at all, but the point is Jimmy was healthy, and back making music. A few years later he would collaborate with Whitesnake’s David Coverdale on the album, Coverdale Page.

Plant followed up Now and Zen with the equally solid Manic Nirvana in 1990 and then my personal favorite from his discography, 1993’s Fate of Nations.

Of course the following year he would reunite with Jimmy Page and the two would embark on a successful four-year collaboration resulting in one live album, one studio album, and several profitable and well-received tours. I had the pleasure of seeing them in Indianapolis in 1995. Talk about bucket list material!

So “what if” John Bonham didn’t drink himself to death? Would Led Zeppelin still be around today? If not today, would they have been around for much or parts of the past 40 years? My educated guess is yes, and no.

If they soldiered on in 1980, business as usual, my answer is no. I think their next studio album would have been nearly as bad as their ’79 release, and I believe fans would have tuned them out in pretty short order.

However, if they could have gone on hiatus in 1980 and taken off the majority of the decade, it may have worked. For one, Bonham obviously would have needed to get sober. Considering the severity of his addiction, I doubt it would have been a quick fix. It would have taken Bonzo several years to get right in my opinion. Page would have needed to kick heroin, which he did. Plant would have needed to regain his focus, which he did. I mentioned 1988 as the year Page returned to music and Plant made his first really solid solo album. I think 1988 could have been the perfect time for the band to start back up. Heading into the ’90’s there was a new-found interest in popular bands from the late ’60’s and ’70’s. My generation was discovering these acts and truly taking to their music. It’s no coincidence that when Page released the Zeppelin box set in 1990 the band’s popularity once again exploded. That popularity wasn’t fueled by old fans feeling nostalgic. It was Generation X. Look at the resurgence of the Allmans and Clapton in the ’90s. Same thing. The timing may have been perfect for a grand Led Zeppelin return.

Of course even if Bonham didn’t die, I don’t think there’s any way Led Zeppelin would have been “allowed” to take an eight-year hiatus. Atlantic Records and their management would have rather bled them for whatever short-term grab they could get and then just let them burn out rather than send them on extended holiday and potentially reap the benefits of another successful 20-25 years down the road. You see, even though they were personally and creatively spent in 1980, they were still considered the biggest Rock band in the world at the time. It’s also worth noting there was never any indication from the band members that they wanted to take a break. I’m simply suggesting it could have been the band’s saving grace.

Bottom line…….we’ll never know. There are no “what if’s.” John Bonham died at age 32 on September 25, 1980 due to complications resulting from pulmonary aspiration. In other words, alcohol asphyxiation. Two months later the surviving members officially announced the band was done. But “what if?”

One thought on ““What if” Series: Led Zeppelin” Leave a comment ›