The year was 1988. Though it would all but come to an end in three short years, the hard rock/hair/metal era was thriving in full force. Def Leppard’s Hysteria was tearing up the charts with one hit single after another. There were new studio albums that year from powerhouse bands of the period including Van Halen, Ratt, Bon Jovi, and Poison. Veteran hard rockers such as AC/DC, Ozzy, and the Scorpions had new releases as well. New hair bands joined the fray in ’88 too, including the likes of Vixen, Bullet Boys, and Winger, featuring Kip Winger’s perfectly manicured chest hair.

Yet there was another new hard rock band that year as well. These guys played loud and had long hair too, but there was definitely something noticeably different about them. Living Colour was formed in the mid-80s by guitar virtuoso Vernon Reid. In 1986 and ’87 they developed a cult following in the New York club scene. But in 1988, with a major label record deal in tow and a new music video on MTV, this 13-year-old boy saw something he’d never seen before. The video was for a song called Cult of Personality, and what I saw was four Black men rocking the absolute shit out of it. Wailing vocals, big bass, heavy drums, and massive guitars…..this wasn’t R&B. This wasn’t Hip Hop. This wasn’t Rap. This was flat-out Rock.

It undoubtably made them unique, but it wasn’t the only thing distinctive about them. Though they were thoroughly a hard rock band, there were certainly elements of funk and punk to their sound as well. They may have looked different than the other hard rockers of the era, but they sounded a little different too. Even their name was different. Perhaps an ode to his London birthplace or his parents’ Caribbean heritage, Reid called the band Living “Colour” instead of “Color.” I always thought it looked cooler that way.

Vernon Reid wasn’t just a guitar virtuoso. He could write. He wrote or co-wrote all but one track on their debut album. The one he didn’t write was a cover of the Talking Heads’ “Memories Can’t Wait.” I love Talking Heads, and that’s a great song. I normally cringe when artists cover good songs from good bands. Yet Living Colour pulled it off. They changed it around, made it their own, and created a version that’s different than David Byrne’s, but equally as good in my opinion. Though the album’s opening track, Cult of Personality, was it’s centerpiece, there were other strong numbers as well.

Other notable songs: I Want to Know, Middle Man, Desperate People (my favorite), Open Letter to a Landlord

The success of Vivid plus a relationship with Mick Jagger (who produced two of the album’s tracks) landed Living Colour an opening-act slot on the Rolling Stone’s Steel Wheels tour. In the course of a year they’d gone from CBGB’s in Manhattan’s East Village to sold-out football stadiums with the Stones. It was a hell of a quick rise. 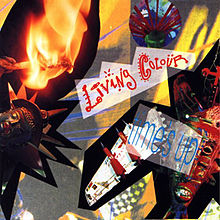 Living Colour would follow up their successful debut with the large, 15-song, 58-minute Time’s Up in 1990. Though it didn’t feature a Cult of Personality-like hit, the song Type saw decent air time on MTV and radio. Time’s Up featured an expansion in the band’s sound and songwriting from their first album. Drummer Will Calhoun was the primary song writer on what I thought was Vivid’s best song (Desperate People). On Time’s Up, Calhoun wrote the album’s best song, Pride, and what I think is its second best, Fight the Fight. Though it didn’t chart as well as Vivid, I believe Time’s Up was not only the better of the two albums, but in fact their career peak.

Other notable songs: Love Rears Its Ugly Head, Elvis is Dead, Solace of You, This is the Life 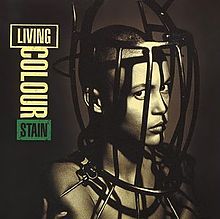 A lot changed in the rock landscape between the release of Living Colour’s second and third albums. By 1993, the hard rock / hair metal era was over. The new thing, led by the Seattle revolution (affectionately or distastefully known as ‘Grunge’) was “Alternative Rock.” On paper you might think this newer, more open landscape of rock appeal might benefit a band of varying influences such as Living Colour. Unfortunately, it didn’t. Despite diehard fans excitement for the band’s 3rd studio album release, overall sales were anything but exciting. There may have been a good reason for that.

To me, Time’s Up was an expansion of Vivid. A similar formula that evolved and grew. This album however, was a pivot. Stain went in a decidedly different direction. There was a personnel change for the new album. Original bassist Muzz Skillings was out, and new bassist Doug Wimbish was in. Whether this led to the change in creative direction or not I don’t know. What I do know is the album’s music is much harder and faster, and the lyrics are negative and downright pessimistic throughout. The album’s featured track, Leave It Alone, was very good, and Will Calhoun may have extended his streak in writing the best song on a Living Colour album once again (Nothingness). Though I think the music is well-executed, as a fan it just wasn’t what I was expecting. Bands pivot sometimes. Hell, U2’s done it several times in their career. Sometimes it works, sometimes it doesn’t. For me, I would have preferred seeing them build off of the work they did on Time’s Up instead of going in a different direction. 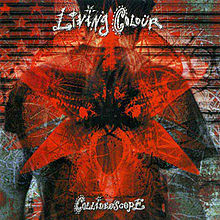 Following their ’93 album, Living Colour officially disbanded two years later. In 2000 the band reunited and started playing live again. This led to the 2003 release of their 4th studio album, Collideoscope. Their 1993 album, Stain, was very sound and tight in its direction. I didn’t particularly care for that direction, but it was a well-produced, solid sounding piece of work. Collideoscope on the other hand, was very haphazard. The album featured a few good songs, but it’s sort of all over the place. I suppose this could be expected from a band that hadn’t written or recorded an album in a decade. It would however, turn out to be a theme for not only this album, but their future releases as well. 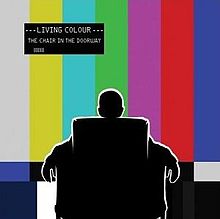 For their 5th studio effort, it only took six years in between albums instead of 10. The result would be a noticeable improvement over their previous release. Overall I don’t think it’s great. In fact, there’s five or six songs I like. What made Chair in the Doorway stand out and surprise me is that the five or six songs I like are really good. Two in particular, Taught Me and Behind the Sun, are right up there as two as the best songs I think Living Colour ever made. That’s something I certainly didn’t see coming from a band I’d more or less written off 16 years prior. I still listen to songs from this album with relative frequency. A little sense of pride knowing a band I once loved could bounce back all these years later and still put a few damn good songs out there. 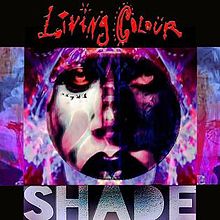 And then there was this…….Eight years after the release of album #5, Living Colour resurfaced with 2017’s Shade. I’m well aware of the old adage about not saying anything if you’ve got nothing nice to say, so I’ll be brief here. If this is what eight years of work produces, then it’s time to move on to other interests in life. I think it’s so bad I don’t even know where to start……so I won’t.

Overall, Living Colour was a band that positively influenced my teenage years and opened many peoples’ eyes and ears to their talents. They enjoyed early success, encountered setbacks, and have persevered. I’m grateful for their music and the mark they made on rock n’ roll. Though their legacy could be summed up as two good albums in three years, followed by a handful of good songs over the next 25, I think you could do a lot worse than Living Colour.

I recently stumbled upon this live gem on youtube. How I never knew about this concert and live album before? No idea. If you love live music. If you love the songs of CCR. If you like a little solo Fogerty mixed in as well…this album is a must-listen.

For those unaware, following CCR’s ugly breakup in 1972, John Fogerty (due largely in part to legal disputes over the music) went decades without performing any of his classic CCR hits. By 1997 all was finally resolved and John was primed to bring those great songs back to life on the stage.

His guitar work and voice was absolutely exceptional here. His band was top-notch and dialed in. Superstar drummer Kenny Arnoff on the skins was a nice bonus too.

It’s one of those shows where you can just tell the performer isn’t mailing it in. Fogerty is fully committed here, and clearly digging the audience and the songs. If you’ve never heard this concert album, I highly recommend it!

Bands and artists are selling their music catalogs left and right. Find out why.

News from Rage Against The Machine…