So Christmas Eve and Christmas Day have passed. Each year the cable and satellite stations treat us to the usual collection of classic Christmas movies. A Christmas Story, National Lampoon’s Christmas Vacation, Elf…..you know the routine. One topic that has gained massive traction in recent years is the debate over whether or not Die Hard is a Christmas movie. It’s funny. I’ve been a fan of the film since its inception. I’ve watched it countless times over the years. Yet I never really thought about it as a Christmas movie. Proponents of this theory make a strong case. In fact, this year, in honor of its 30th anniversary, IFC (Independent Film Channel) gave it the royal holiday treatment. 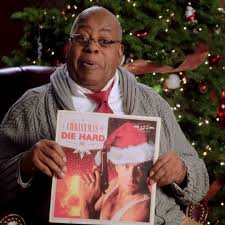 Yes, that’s Reginald Vel Johnson, a.k.a. “Al the cop” from the original film. They featured him in on-going segments at commercial breaks, hosting a 24-hour Die Hard marathon. His little skits were hilarious. I DVR’ed one airing of the film. I hadn’t sat down and enjoyed an uninterrupted viewing of it from start to finish in some time. I had to record it and watch it later because even though IFC is fortunately unedited, there are commercials, and I can’t live with those. Sporting events are the only thing I can watch in “real-time” in this day and age. More than anything, I wanted to test this Christmas movie theory. The thing is……the supporters are right. I guess I’d always been so consumed by the action and the story that I never noticed all the holiday references littered throughout the film. I mean sure, it’s certainly not your textbook Christmas movie by any means, but it’s not that big of stretch to label Die Hard a Christmas movie. That said, this post isn’t intended to segue into a debate about the greatest Christmas movies. Truth is, there are very few (non-animated) Christmas movies I actually like. Just give me Clark Griswold, Buddy the Elf, and of course, John McClane……and I’m all good!

No, in honor of what has (unbelievably) been 30 years now, I’d rather spout off about the adventures of Officer John McClane and the series that introduced us to him…..Die Hard. 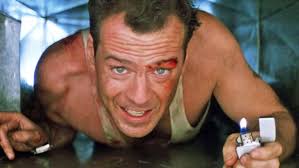 I didn’t see it in the theater. I tricked my mom into taking me to see Arnold Schwarzenegger’s R-rated film Predator in 1987 when I was 12 years old. She wasn’t likely to make the same mistake in ’88 for the R-rated Die Hard. It wouldn’t have mattered though. At the time I can’t remember anyone who had any interest in seeing it. Bruce Willis starring in an “action” film? Bruce Willis starring in a film period? The guy from the t.v. show Moonlighting? The comedian? The guy from the Seagram’s Golden Wine Coolers commercials? Seriously? If I recall, critics panned the film as well. Funny thing happened though….people who actually saw the film, loved it. In those days it took a while for theatrical releases to find their way to the video rental stores. By the time it finally came out on video, there was a buzz about it. The buzz was legit. I still remember seeing it for the first time. My friends and I were blown away. Sure, there had been other shoot-em-up action films prior to Die Hard, but never one with quite the same premise. The concept of the one man army confined within one setting was unique. It almost put us, the viewer, right in there with John. Unlike far-fetched over the top action flicks like Rambo: First Blood Part 2, this one felt more realistic. Security measures have vastly changed in 30 years, but in 1988 it didn’t feel all that implausible the way the bad guys overtook Nakatomi Tower. It didn’t seem all that impossible that a gritty cop with McClane’s skill set would be capable of picking these guys off one-by-one. Ok, ok….tying a fire hose around your waist, jumping off an exploding roof, and sling-shooting your way through glass into an office on a lower floor? Yeah…..that one wouldn’t have a very high percentage success rate. Yet most of his other stunts and escapades sort of came across to the riveted viewing audience as doable.

As great as the plot and action sequences were in Die Hard, what really set this film apart in my mind was the villain. Die Hard featured one of the best villains of all time….Hans Gruber. A great villain to me is someone who makes the viewer feel conflicted. By this I mean, yes, we know he’s the bad guy, and at some point he’s got to get what he’s got coming to him. The good guy of course has to prevail in the end. But, we feel conflicted because we’ve come to sort of like the villain. I personally have an all-time Top 3 favorite villains in no particular order: Darth Vader, J.R. Ewing, and Hans Gruber. Whether it be their charisma, intelligence, badass-ness if you will, there’s something about a great villain that makes us almost want to see them win. It goes without saying a great villain certainly elevates a story. I never heard of Alan Rickman prior to this film. I recall thinking, I don’t know where this guy came from but the dude can act! In some ways, I’d argue he stole the show. Turns out that wouldn’t be an uncommon occurrence for Rickman. I saw him a few years later playing the Sheriff of Nottingham in Kevin Costner’s Robin Hood: Prince of Thieves and Rickman once again stole the show. He was relatively selective in his roles. I didn’t see a great deal of his work. Seems every time I did I felt the same way about his performances. Alan died in January 2016 at the age of 69 from pancreatic cancer. The world lost a great actor that day, but I digress.

Speaking of the Die Hard world, success breeds sequels, and this series had no shortage of those over the years. The original was quickly followed up by Die Hard 2 in 1990. Instead of John McClane in a 40-story tower, it was John McClane in an airport. There was no Hans Gruber this time, but William Sadler portrayed a relatively convincing bad guy as General Stuart. He had an assist from veteran actor John Amos as well. Though the premise of this film was not nearly as believable as the original, and the action sequences were far more unrealistic, I still found it to be an enjoyable two hours. McClaine was a likable hero, and the good buzz from the first film still resonated to this one.

Following a five-year hiatus, the adventures of John McClane returned for Die Hard With a Vengeance. They took a page out of the original this time, casting an excellent actor to play the villain…..Jeremy Irons. They also added the hardest working man in show business, Samuel L. Jackson, to play McClane’s sidekick. The casting of Irons worked. I didn’t feel Jackson did. It felt more like a forced “buddy action” flick. If I want that, I’ll watch Gibson & Glover in Lethal Weapon and Lethal Weapon 2.

12 years later in 2007 they dragged Bruce back with the 4th installment, Live Free or Die Hard. I know a lot of people who really liked this one. Many folks, including film critics, say it was the best since the original. I don’t know. I made it through the whole film. I didn’t come away feeling as though I’d lost two hours of my life I’d never get back. Yet, to this day I’ve never viewed it a second time and don’t have any desire to really do so.

Finally, 2013 brought what is hopefully the end…..A Good Day to Die Hard. This film was so bad I literally turned it off 20 minutes in. I’ve since blocked those 20 minutes out of my memory. It’s so evident Willis was only on board for the money grab at this point. One night he was on one of the late night talk shows and he kept calling it “Die Hard 5.” He admitted right there on t.v. he couldn’t remember what the title of the film even was.

When I think about Die Hard I don’t think about those bad sequels. I think about that film back in 1988 starring some t.v. co-star comedian that no one was excited about seeing. A film that turned out to be an absolute game-changer. It set the new standard for action flicks. After Die Hard we’d see Die Hard on a bus –Speed, Die Hard on a boat-Under Siege, Die Hard on a……fill in the blank. Whether it was a Christmas movie or not…….you be the judge. All I know for sure is it was one kick-ass movie that stands the test of time!