I recently read the founder of Tower Records passed away. I never had a Tower Records in my little hometown, but it got me thinking about record stores in general. In South Bend we had Tracks Records and Orbit Music. During my college years in Bloomington, we also had a Tracks, as well as Karma Records, Streetside Records, and the Den. I realize there’s technically no need for record stores today. We simply log on to the Apple store and download our music digitally to our phones. I’m not knocking it. I’m no stranger to it. Probably 75% of my CD library is now on my phone and the convenience is unparalleled.

Yet record stores did more than just sell music. They were an experience. I miss walking in and listening to whatever new tunes the employees were playing in the store. I enjoyed glancing at the big board to see the release dates for new albums, hoping to see one of my favorite bands or artists on that list. Prior to the information age we live in today, that sort of information wasn’t so readily available. Other than the actual record stores, the only other ways to find out about upcoming album releases was typically from MTV, Rolling Stone magazine, or an informative DJ if your local radio station had one of those.

I loved rummaging through the used CD racks, hopeful I might unearth some rarity or gem. I can still smell the incense permeating the store. Sometimes you’d meet some interesting characters as well. Often you’d meet folks who were knowledgeable about music, and maybe even turn you on to something new you’d never heard of before. The college record stores followed a trend started by Tower Records and occasionally had midnight release sales. Yes, we’d actually head over to the store about a quarter to 12 on a Monday night, all excited to get our paws on the new album from some band we loved. Granted, not something I’d do in my 40s, but it seemed fun at 19. It felt like a special event! As I said, I understand why record stores don’t exist anymore, but I certainly feel we’ve lost something in their absence.

Now I’m not saying all forms of music nostalgia are good. 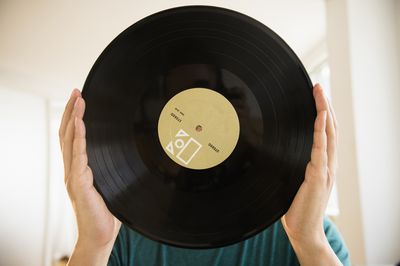 If you’ve stepped foot in a Barnes and Noble the past couple years you’ve probably noticed a whole bunch of these on the shelves. Let me be clear here: I’m no music producer, engineer, mixer, etc., so I’m in no position to debate those more knowledgeable on the subject regarding sound quality. I’ve always been told nothing beats the sound quality produced from a vinyl record. Fine. I believe you. Yet I’ll be damned if I’m going back to those puppies. I’m old enough to remember when that was the medium for listening to music. I had a phonograph and a record collection myself. I never cared for them then, and I wouldn’t now. I personally think the resurgence of vinyl’s popularity the past few years is just something fueled by contrarian hipsters who want to do something different. I’ve got no problem with that. I’ll admit, I do miss the sensory connection to physical forms of music. For me though, those sensory sensibilities were satisfied by CDs. The vinyl thing was never my bag. Let’s just hope cassettes don’t make a comeback. Hipsters won’t even have the sound quality argument on their side with those. Do you really miss the sound of tape hiss? Barf!

Nostalgia is a funny thing. People love to talk about “The Good Old Days” all the time. Don’t get me wrong, there are plenty of things I miss. I’ve blogged before about how much I miss video stores. I know Netflix is better. Yet I still miss heading over to my local Blockbuster and Hollywood Video, or more so, the Mom & Pop stores we had prior to those.

Sometimes though, I think nostalgia messes with us. Do we really miss the products and places, or do we miss the feeling of happiness we had in our lives back when those things were commonplace?

Do you ever hear folks talk about how they miss typewriters? The banging on the keys? The dinging of the bell? I don’t want to question anyone’s feelings on the matter, but dare I call out bullshit when I hear it? So….manually loading paper? Manually moving the scroll or wheel or whatever-it’s-called back to the left? Inserting corrective tape in case you misspell a word? Hoping you inserted each individual sheet evenly so your text doesn’t end up cockeyed? Of all the advances in technology, and I mean all……nothing has likely improved our lives more than computer word processing.  Unless I’m James Caan and I need one of those things to hit Kathy Bates over the head with in the film Misery, I’ve got no use for the typewriter. You may miss the Good Old Days, but it ain’t because of that God-forsaken thing!

That said, there are things I miss:

-Lifting the hood of my car, knowing what I’m looking at, and even being able to do some work on it. I don’t know a lot about cars, but I figured out how to change spark plugs, wires, hoses, and adjust the timing on my 1981 Monte Carlo. The car I bought last summer? I didn’t even open the hood prior to purchase. Why? Wouldn’t have known what I was looking at anyway.

-Quality-built toys. Having two young sons, I get my fill of toy-playing. Tell you this though, my kids’ action figures don’t hold a candle to the Batmans and Green Lanterns I had. Hell, they don’t even make G.I. Joe’s anymore. Sorry kids. You missed out on that!

I’m sure there are plenty of other things I miss too. But you gotta be careful with nostalgia. It’s ok to miss those Good Old Days, but if you miss them too much, you might get too depressed to make tomorrow a good old day someday.