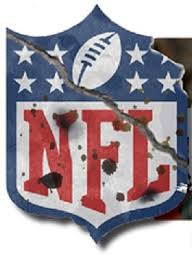 The National Football League. It’s still the most popular professional sport in America. Yet, it’s popularity has waned with folks in recent years, and the reasons are plentiful. In truth, I believe most of their issues can be easily solved. Here’s a list of my suggestions.

The sideline National Anthem protest: As much as I don’t want to talk about this, there’s no avoiding it. It’s become the hot-button issue that’s transcended sports the past year. Hell, it even angered Papa John, the pizza guy!

As I’ve said many times, I’m a supporter of standing and showing proper respect during the anthem. Even if it means nothing to you, what’s 90 seconds of your life to just stand there and be respectful? Now yes, the next time the player’s union and the league sit down at the negotiating table to hash out their next collective bargaining agreement, the league could demand a clause where all participants must stand during the anthem. The current agreement however, does not contain such a clause. Therefore, for now anyway, you’re dealing with a 1st Amendment right issue. The 1st Amendment, not through interpretation, but in its actual wording, states that Americans have a right to peaceful protest of their government. Like it or not, kneeling during the anthem would constitute as peaceful protest. So until the next contract, there’s nothing to league can do to stop it.

There is a solution however. I don’t know exactly when television started broadcasting the anthem. Seems most of my life I recall the anthem being broadcasted for marquee events only (the Super Bowl, World Series, collegiate championships, etc.). If you think about it, why do they broadcast the anthem? Let me ask you this….when you’re in your man cave or living room on Sundays, do you stop what you’re doing, stand at attention, hand on heart, cap removed, and honor America during the anthem? If you do, you’re the first person I’ve heard of that does. Most folks during the anthem are busy getting a drink, filling the Doritos bowl, taking a leak, or Facebooking on their smart phone waiting for the game to start. Take away the cameras, you take away the millions of eyes watching. You take away “the big deal”. Sure, a few thousand of the thousands in attendance might notice some guy not standing on the sideline, but the big polarized issue this has become would essentially dissipate.

Owners love it. Players hate it. Fans are mixed. The owners love it because it draws additional league revenue. For that reason, it’s not going away. Players hate it for the obvious reason that it simply doesn’t allow sufficient time for bodily recovery. The physical nature of this sport is immense. To ask players to go out there and do it again on four days rest is intolerable. To me, the solution to this is so simple.

One year back in the mid-90s the NFL played a season with two bye weeks instead of one. All they need to do is reinstitute this. Give the two teams playing on Thursday a bye week the Sunday prior. This eliminates the issue of insufficient rest. They could do this one of two ways: One, eliminate the week off between the conference championship games and the Super Bowl. That’s what they did that season back in the ’90s. Or two, simply push the Super Bowl one week later on the schedule to make room for the additional bye week. I’m pretty sure the Super Bowl is the biggest single-day sporting event in the country, if not the world. I highly doubt any would-be advertisers would balk at the big game taking place on the second Sunday of February instead of the first.

Now granted, this would mean the two teams playing on Thursday night of Week 2 would actually have a bye-week on Week 1. So what? Although the fans of these teams will be disappointed not seeing them compete on the league’s opening weekend, they won’t have to wait until the following Sunday to see them. They’ll see them in four days on Thursday night. Problem solved. Somebody call the league and tell them I’m awaiting my consulting check for this one!

What would an NFL game be today without the constant game-stopping act of penalty-flag throwing? Sure, penalties have always been a part of the game, but the proliferation of penalties seem to keep growing with each week and each season. Sporting events are at their most entertaining level when the pace of the game flows. When’s the last time you watched an entire offensive drive, let alone a set of downs, without a flag being tossed? Although I find player-endzone touchdown celebrations to be mostly annoying, I’m actually glad the NFL did away with celebration penalties this season. That’s at least one less reason for these guys to throw their yellow flags. Yet there are way too many holding, interference, and unsportsmanlike conduct penalties in the game today. I know some calls are unavoidable. It can certainly be argued that undisciplined play on the field today lends itself to more penalties as well. That said, I think the problem can somewhat be addressed by simply letting the players play. Think about it in basketball terms. The best games are usually the ones where the refs swallow their whistles and let the boys play.

According to sportingcharts.com: Coined after all-star wide receiver Calvin Johnson, it states that the receiver must maintain full control of the ball even after hitting the ground.  The ground can not cause a fumble, but it can cause an incomplete pass (if the player has not made a ‘football move’)

In layman’s terms, this rule refers to those handful of times when you’ve watched a receiver make a catch, only to have it overturned due to the “Calvin Johnson rule.” Emphasis on the “make a catch” part. Yes, a catch. In every instance in which this horrible rule has been applied, it has essentially negated a valid football catch. This raised some stink when it cost the Dallas Cowboys a playoff win a couple of years ago. It raised more stink when it cost the Steelers a game with massive playoff implications last week. Yet, it is always addressed with the disclaimer….it’s the rule. Well, the rule sucks, and being a rule doesn’t make it right. What happens when this “rule” ends up deciding the Super Bowl? Just wait, it will one day. Is that what needs to happen for change to occur? Let’s hope it doesn’t come to that. Solution…….change the rule!

This is a problem I don’t have a solution for. Rather, I can only offer two realities. Let’s start with some perspective: fundamentally, the game is the same today as it was 50 years ago. The obvious difference is the size, speed, and strength of the participants. Many of today’s quarterbacks are the same size or bigger than the linebackers of yester year’s game. 30 years ago there were a half-dozen 300-pound men in the league. Today, every offensive linemen and many defensive linemen are 300-plus pounds in size. Long story short, there are no advances in helmet technology that can completely defend against the blunt force exhibited in today’s game.

Reality #1: You know what you’re signing up for. It’s time for the league to stop pretending it can make this game safe. It’s not a safe game. Guys aren’t going to get smaller, slower, or weaker, so it’s never going to get safer. Throwing more unneccessary roughness flags will not protect QBs. The constant tweaking of the rules regarding the way defenders can tackle offensive players will not protect them either. It’s time to call a spade a spade. This is a brutal, violent game. Stop sugar-coating it. Stop attempting to leaven the action. Players know what this game is. They still want to play. No one makes them play. If they are willing to live with the consequences, (and believe me, nearly all of them say they are) then have at it. No one tells a boxer to punch less hard in the ring. Same deal here.

Reality #2: The game goes away. I can’t see this happening in my lifetime, but I can see it happening eventually. It will happen. It’s just a matter of when.

I’m really tired of the NFL’s code of conduct rules. Other pro sports in this country tend to punish players when those players break the law. Get arrested for a physical altercation? Suspension. A DUI? Suspension. Illegal gun possession? Suspension. Drugs? Suspension. I get it. Yet, in the NFL, even if you don’t get charged with a crime (see Dallas Cowboy’s RB Ezekiel Elliott’s case) the NFL will still suspend you because they feel your behavior is against their moral code of conduct.

Are you kidding me? Moral code of conduct? Where were the league’s morals when they allowed Adrian Peterson to return to the NFL? This guy beat a four-year-old child on his bare testicles with a stick. Or Greg Hardy? He got to come back after he beat the hell out of his pregnant girlfriend. The league runs roughshod and inconsistently with their punishments. There’s nearly no rhyme or reason to their rulings. They need to stop pretending to be the moral compass of society. They’re damn far from it!

Here’s hoping these suggestions find their way to the NFL headquarters in Manhattan. I love this game. I think it can be better. I think many of their current issues can be resolved. Let’s hope so!

To some, the most impressive thing about this album is that it spent over 30 weeks at #1 on the Billboard charts. To others, perhaps it’s the fact this album to date is 40 times Platinum. Yes, that’s over 40 millions copies sold in some form or another.

Yet for me, the most impressive thing about Rumors is how something so great could come from such turmoil and tension. Lindsay Buckingham and Stevie Nicks, partners since the ’60s, had recently broken up. John and Christie McVie, married since 1968, had recently divorced. Yet, these two couples were all still in the band! Add to this real life soap opera, the 5th wheel if you will, the band’s namesake….Mick Fleetwood, started seeing Stevie for a stretch in 1977. Well, who says nothing good comes from drama and stress? For Fleetwood Mac, this personal craziness produced the greatest album of their career and one of the all-time classic records in rock history. Who would’a thunk?