Does anyone remember boxing? I’d understand if you don’t. Well last weekend, for the first time in probably 15 years, I watched a great boxing match. Not only a great fight, but a great heavyweight championship bout. As a huge boxing fan all my life, I was resigned to the fact the sport was dead. I can’t tell you how surprising and refreshing this was.

The man in the white trunks in the above image is named Anthony Joshua. Heard of him? Of course you haven’t. Last Saturday night before a sold-out crowd of 90,000 in London’s Wembley Stadium, he won an 11th-round knockout over Wladimir Klitschko. The fight was a classic. Joshua knocked the 41-year-old veteran to the canvas in Round 5. Showing the heart of an old champ, Klitschko rebounded to knock Joshua down in the 6th round, and then appear to dominate the next few rounds. Then young Joshua recovered himself, and knocked Wladimir down twice in the 11th before the ref stopped the fight. The contest was exciting from the first round bell until the end. Unlike the horrible excuse for heavyweight fighters we’ve seen for the past near-two decades, these guys didn’t spend the lion’s share of the fight hanging on to one and other. They boxed. They legitimately boxed the entire fight. Toe-to-toe. Jab for jab. Body punch for body punch. Power shots back and forth. You’d have thought this was the “good ol’ days” of a sport long since forgotten.

The victory brought 28-year-old Anthony Joshua, a British Olympic Champion, to a record of 19-0 with 19 knockouts. We haven’t seen a stat line like that since the mid-eighties and a guy named Mike Tyson.

I know it’s only one fight, and one fight can’t revive a dead sport. But if boxing is ever coming back, I’ve always said it’s got to be a great heavyweight fighter who brings it back. Don’t get me wrong, I loved the middleweight division. My dad’s era saw middleweight greats such as Jake LaMotta, Rocky Graziano, and Sugar Ray Robinson. When I was a young kid I got to witness the second golden age of middleweights in Roberto Duran, Marvin Hagler, Tommy Hearns, and Sugar Ray Leonard. But the juice of the sport has always been the big guys. Max Baer, James J. Braddock, Joe Louis, Rocky Marciano, Sonny Liston, Muhammad Ali, George Foreman, Larry Holmes, Joe Frazier, Ken Norton, Mike Tyson, Evander Holyfield, Riddick Bowe, Lennox Lewis.

Anthony Joshua is well-spoken (he’s British), respectful (again…British), and a very skilled and disciplined fighter. You can tell he was brought up and trained properly. He has excellent technical boxing skills. Also important, he’s got punching ability that can drop a 240 pound man on his ass. That sort of thing tends to generate excitement from viewing audiences. 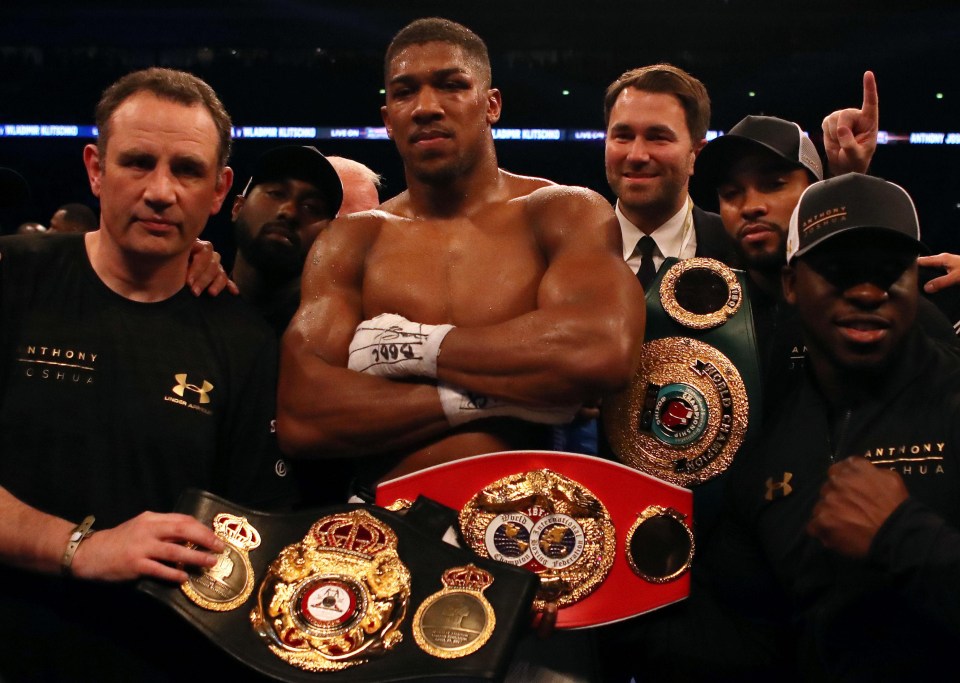 The sport of boxing has been littered with bums for years. Even if this kid is the real deal, there’s no guarantee it will mean anything. After all, a great fighter needs great fighters to fight. How would we remember Ali without Frazier and Foreman? Leonard without Duran? Tyson without Holyfield? You get the picture.

If nothing else, I got to witness something I never thought I’d see again. A great, classic fight from a once-great sport that I thought was dead. Maybe Anthony Joshua can bring it back. It would be so refreshing to never hear the name Rhonda Rousey or Connor McGregor again. No offense to UFC fans. I tried many times to watch that stuff, and I still think it’s utter, hot garbage. I think one reason a lot of folks like UFC is because they’ve either never seen or don’t remember boxing the way it once was. The way my dad remembers it. The way I remember it. The way I’d love to see it get back to. So you go young Joshua. Keep kicking ass and taking names. Lead this awesome sport back to where it belongs!