Do you ever complain about where you live? Do you ever admire those you know who live in places like Florida, North Carolina, California, Colorado, Arizona, etc.? Of course you do. We all do.

Other than a trip to Florida when I was very young, my first real venture from home was Coronado Island, California when I was 15 years old. 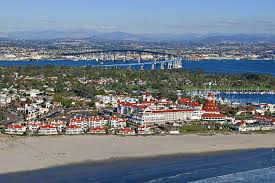 27 years later I still remember the smell, sights, and sounds of the Pacific Ocean from the shores of Coronado. Granted, I’ve never been to Hawaii, but this was the most beautiful place I’ve ever been to in the USA.

In 2000, I visited an old college friend in Arizona. My first time in the Southwest. He lived in Scottsdale. We spent time in Phoenix and Tempe as well. I enjoyed it very much. What I loved however, was the two days we spent in Sedona and Flagstaff. Despite just a few hour’s drive north of Phoenix, it was nothing like the valley. It was some of the most breathtaking country I’d ever seen. Flying home I remember thinking, “I will live there one day.”

Throughout the 2000s I started a love affair with Las Vegas. Over the next 10 years I made 9 trips to Sin City.

Most of those trips were in August. A sort of cap to the summer just prior to returning to work at school. It also didn’t hurt that Vegas vacations are cheap in August. How else do school teachers afford trips to Vegas almost every year? As you imagine, Las Vegas is very hot that time of year. Some folks like to point out that it’s a “dry heat.” Yeah, ok, whatever. Hot is hot. Nonetheless I loved the climate. That heat on my bones felt great……….or maybe it was the booze?

Five years ago, Julie and I finally got the chance to visit my Dad in Marco Island, Florida. Simply put, I think it’s about as close as you can get to paradise in the continental US.

Fast forward to 2017, and here I am still living in the Midwest. After putting the boys to bed, I sat out on my front porch for a little while and enjoyed the 74-degree beautiful Spring evening. I realized in that moment, there’s something to be said about the changing of the seasons. Granted, there are prettier places in seasonal-changing locations to live than Northern Indiana. I don’t even need to leave my home state to find it. Southern Indiana, with its rolling hills and slightly more moderate seasonal changes is more desirable.

I know those places I mentioned, as well as the many other beautiful places in America I’ve never been to, are prettier, warmer, and nicer places to live. But I often wonder, if I lived there, would I still appreciate it everyday, or simply get used to it and take it for granted?

There’s something to be said about living through seasonal changes. That 74-degree, peaceful evening I enjoyed on the porch would be just another night somewhere else. Around here, it’s something to stop, take in, and appreciate, because it will change. Of course, it will be back again next year. Renewal is reassuring.